Until one day, a year later, he emailed me. He was like, you know, I’m still in this business and I really want to make it work. So what are you doing to grow your business?

So I gave him some techniques, and a couple months later, his volume started growing and he was building a team and he was recruiting more than anyone else on my team.

And we started to correspond through email, and it turned out that he’s a really, really nice guy. He was sober and I saw a lot of me in him. You know, I’m sober. And you know, I can have a temper myself. So I really felt like he was an older brother in a way.

We really started to hit it off and he became my number one of my leaders and what’s funny is that he, I did a video one day about God, and he emailed right after I did that video about God and he said, you know, he was like, Jesus works in mysterious ways or something like that.

So I discovered that he was a believer, a Christian, and made me like him even more. So even though we hit it off really bad, it turned out that he became one of my best friends really on the internet.

And today, a woman called me because he wasn’t available to talk to her. So she reached out to me because I’m his direct upline, and I was talking to her and showing her the ropes and telling her everything I know about network marketing and how I grow it, and how he grows it.

I found out that she was a Christian. And we really hit it off. I mean, very powerful, almost tears, you know, talking on the phone, and we texted after that. And she was like, you know, it’s meant to be that I’m on your team. I clicked on that ad for a reason.

And I was like, Yeah, I believe so. And God leads us to the right people at the right time. And I’ve been dealing with a lot of guilt and shame from my past, you know, being an ex alcoholic and hurting a lot of people, and now I say that I have social anxiety and I’m scared of people.

But really that’s just fear that Satan, you know, Satan wants us divided and living in fear, and the whole social anxiety thing, you know, what you focus on grows. Eight years ago I had a panic attack around my parents, and ever since then I’ve been labeling myself as a person with social anxiety.

So I really, when I say I have social anxiety, and I have this and I have that, try to label myself and play smaller than I should, then I’m giving Satan power by playing small.

Because I really do love people, and I need people in my life. And it’s people like this today that I connect with that God is putting in my life. I’m in the middle of nowhere. My wife is gone right now, and I was feeling pretty lonely. Then this woman comes into my life and she’s a strong Christian and we had an amazing talk, and she had an amazing talk with my leader after I talked to her, and they almost cried.

But today, I talked to this woman for an hour easily. And a couple weeks ago, I talked to a schizophrenic man who opted into my business to take the free tour and I really enjoyed talking to him. I was very curious, and in fact, I called him a week later. He thought I was trying to get him in my business. I was like, No, I just want to talk. Yeah. I want to know how you’re doing – and that’s not like me.

So Jesus is definitely changing my heart. Network Marketing is the business of growth, both financial and spiritual. But Jesus brought all these people into my life. Good and bad, says in the Bible that you know, if your enemy wants your shirt, give them your coat too,  meaning be completely selfless and giving, even if it’s your enemy.

We learn from everyone, even the the most angry, the most angry or the most hurt, they need the most love. And our society teaches us to shun the people that are angry and and crazy and and broke and poor.

You know, I’ve been giving a lot – every time I see a homeless man, I’ll give them all the change in my pocket. I do what I can. It feels good to give. And when I was an alcoholic, I took a took and I took when I was an alcoholic, it was all about me. So this profession is really opening up my heart, but God is behind all of it. So we just wanted to shoot this quick video and say that life is a trip, and God works miracles through other people and through dreams.

You know, about four years ago, I had a dream that my guardian angel came, and God will present angels in a way that we can recognize them. I was a heavy metal rocker in the past. So these angels in my dream were like scarred up Old Rockers, they had scars on their face. And they’re really mangled up, you know, like old bikers.

And I guess I related to that, and one of the guys, it could have been a band there was like five of them, but one of the guys came up to me and we talked for a while and then I had to go because I guess I was gonna wake up or something. This was a dream. But he hugged me, and I hugged him back. It was the most powerful love I’ve ever felt. It was more than a dream. It was another alternate world, possibly in heaven.

He felt like a long lost brother. I never had a brother. I had an older sister, and we didn’t talk for years. She was different from me. I always wanted a brother and this guy when he hugged me, it felt like a love I’ve never felt and when I woke up, I bawled my eyes out for a few hours. I couldn’t gain composure. I just lost it.

And looking back, I truly felt like that was my guardian angel. And he’s been watching over me my whole life. And I could have died so many times. I mean, I drank and drove over 100 times. Many times, I didn’t even make it into my driveway.

I had a girlfriend one time she found me by the highway still in my car. And it was December my window was rolled down. I was passed out but my head kept hitting the steering wheel and honking the horn, and then I’d go like this. And then I hit the horn and she found me. She dragged me to my home and turned the heater on and got me into some dry clothes. And I could have died there. I could have died from a heart attack when I was 32 years old, I could have died so many times.

So I really do believe we have a guardian angel looking over us. But life is a trip. And the more I open up my heart, the more there’s opportunity to connect with people, and network marketing is a great place to do that. It’s just overwhelming. You know, I hurt a lot of people.

I remember my mom coming up to me and saying, talk to your dad, he’s crying, you’re breaking his heart. Talk to him and I was like, nope. Then he kicked me out. Then I was homeless for about a year, sleeping on friends floors, washing dishes for a living. And yeah, I made up with my dad about 12 years ago when I got sober. But I still had this shame and guilt.

And Satan loves guilt and shame. He wants us to stay there. And that’s part of the old man. You know, that part of Erik Christian Johnson is dead, just like the Agel company. And it’s nailed to the cross. I have to really have faith and believe that all my sin died when Jesus Got crucified.

So I went to visit my wife’s mom a couple years ago and I was so scared. I was like, I can’t go, I got social anxiety, blah, blah, blah, Excuses, excuses. And I finally met her and everything went fine. But my wife told me that her mom later said about me, he just needs to have more faith. And that really stuck with me that she said that I just need to have more faith. Because I get so scared. I’m like, Oh, I can’t see people. I can’t do this. I can’t do that. And if I had more faith, that I can conquer all with Jesus. Then I’d be invincible. I could speak on stage. I can talk to groups of people. I can live a phenomenal life without Anxiety.

Every second that I waste, thinking about, Oh, I got anxiety. Oh, I’m an ex alcoholic. Oh, I hurt so many people. That’s me just thinking about being the old man, and that’s dead. I might have habits of the old man but I can break habits.

Because right now I’m the new man. And I need to have more faith and walk in righteousness because God doesn’t see my past. He only sees what I can become. He wants me to grow up into him and be completely righteous. And that means looking people in the eye and being completely sure of myself and not having any doubt or guilt. Because I love my brothers and sisters. I don’t have any guilt or shame left because the old man is dead.

That’s it. Network Marketing is a very empowering profession. But it’s pointless without making friends and forming relationships. It’s pointless. And I am crying out for friends. Even though I say I automate my thriving MLM business as much as possible, I still crave that human connection. So that’s it. That’s network marketing and Jesus, hope you like this. Leave a comment. If you’re going through anything in your life like this. I will talk to you soon. 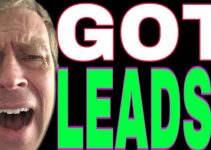